The Patriots/ Rams matchup in Super Bowl LIII wasn’t exactly action-packed. Much of the game was spent with either team moving the ball slooooowly down the field. By the end of the third quarter, the score was tied 3-3.  That’s when this tweet from the orange-flavored beverage Sunny D was issued from the company’s official Twitter account:

While it may seem odd that a beverage would be live-tweeting a sporting event in first person, this is a prime example of how companies anthropomorphize their products in an attempt to draw in the Millennial and Gen Y crowds.  While Wendy’s arguably has the best comebacks on Twitter—I mean, seriously, check this out— 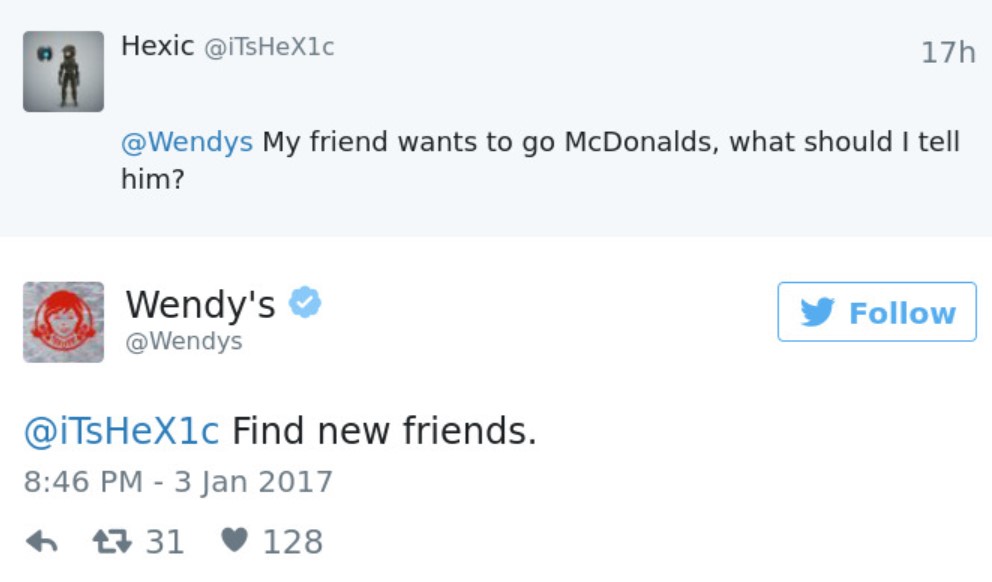 —numerous other companies also use their Twitter accounts for marketing outreach and brand engagement.

Fans and sports commentators alike agreed with Sunny D’s review that the Super Bowl up to that point had been boring and borderline unwatchable.  The following day, however, other Twitter users (real people and companies alike) took the tweet out of context, and quickly swooped in to comfort Sunny D in its “time of sorrow:” 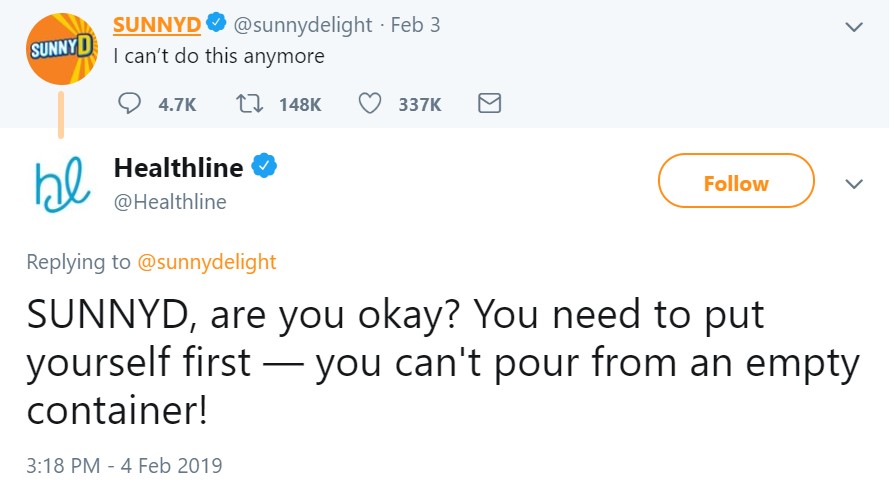 Sunny D’s original football commentary quickly became a lovefest as the tweet went viral. Snack company Little Debbie decided to take the conversation to a higher level of gravity with these helpful tips for dealing with depression: 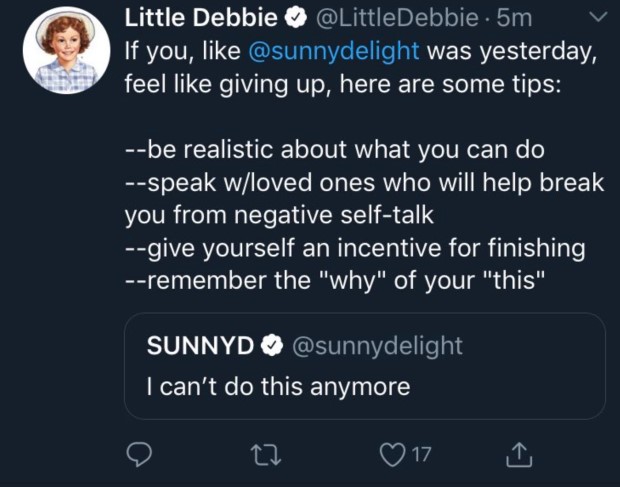 A junk food company offering a frank discussion of mental health did not sit well with many Twitter users, though. It felt like a huge slap in the face to many users actually suffering with mental health issues and depression—the audacity of these companies to capitalize pain and suffering for profit was just too insulting: 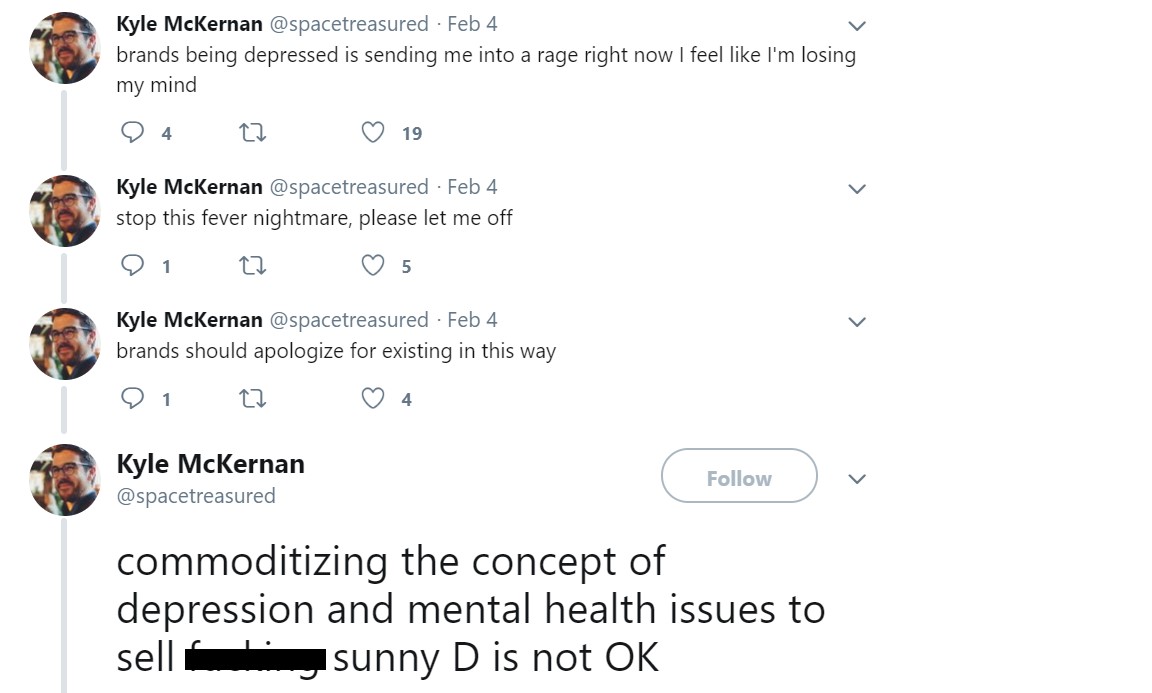 Brands Saying Bae wasn’t finished there, however.  As followers continued discussion of the original Sunny D tweet, Brands Saying Bae offered this explanation as to how this whole mess came to be in the first place: 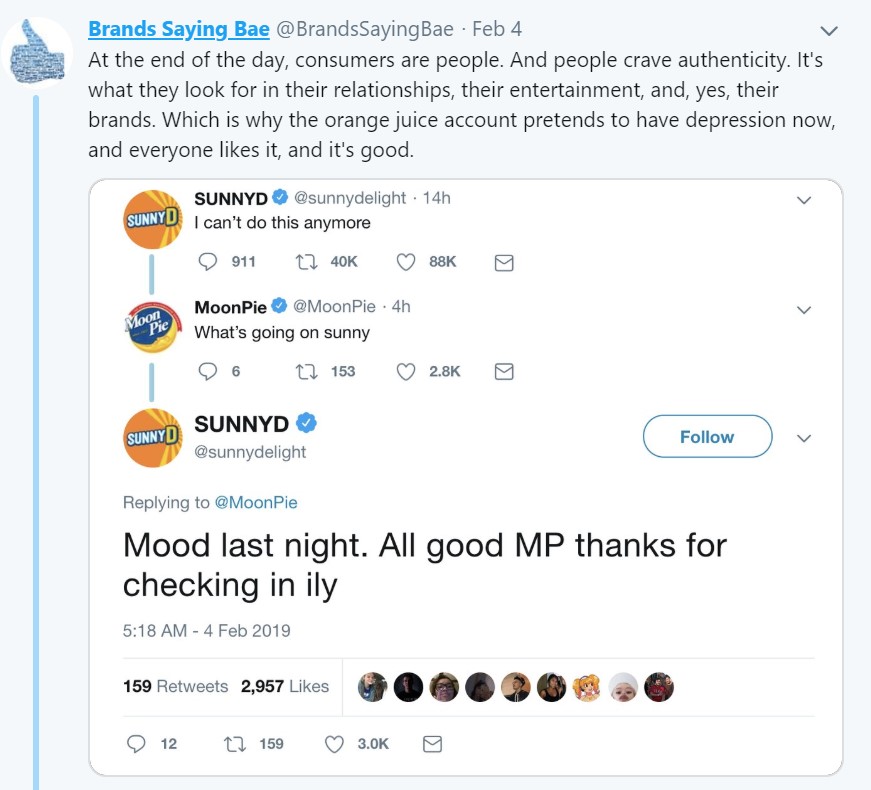 Food and dining website Eater offered its own criticism with the judgment that brands selling depression to consumers is an extremely poor brand engagement strategy. Eater author Greg Morabito sums up the discussion nicely with this closing sentiment:

“The message, it seems, is that these Twitter accounts are actual real souls, lost in a digital ether. They feel pain, but you will never really know why. The least you can do, though, is pay attention to their suffering, and maybe think of their struggle the next time you’re in the drink aisle. But there is also a second option: ignore the brand and its disingenuous act completely, and hopefully, eventually, these stunts will come to an end.”

One can only hope. In the meantime, there are much better ways to engage with your customers. To discover how you can leverage your social media accounts to market your business or products in a positive light, read our previous blog posts here and here. Don’t let what happened to Sunny D happen to you!