Coming up with a memorable slogan for your business shouldn’t be all that difficult, right? After all, anything good is worth remembering. Well, that’s not entirely true. While some things do go viral unexpectedly, conjuring a slogan or ad that resonates with people in a good way is truly a form of art. What is the one thing you want people to remember about your company? Take that idea and run with it. If you do it right, you should have customers spouting your tagline to each other, singing your jingle, or repeating your slogan every time your brand is mentioned. When your brand and your slogan become interchangeable, you know your brand is part of everyday communication—at least in your audience’s mind.

If you don’t believe that, think about some of the most successful advertising slogans. When you hear them, can you automatically place the brand? Try it.

We’re willing to bet you can answer at least two-thirds of the above, if not all three.

Are slogans really that powerful? Can they really make or break a company? You be the judge. See what you think about the following.

Have you ever heard of Chubettes? There’s a good reason for that. It’s a company that was targeted for girls who were considered to be “overweight” in the 1950s. Imagine an advertising campaign with a slogan such as:

“She can have a tummy … and still look yummy!”

The ad goes on to inform mothers that their “plump” daughters deserve to look as slim as their friends do. Can you imagine a little girl (because they market to girls from ages six to sixteen) seeing this ad, and then finding the advertised clothing laid out on her bed? What a gift, right? Common psychology today informs parents that such an ad could be enough of a devastation to a child to cause poor body image that leads to not only unhealthy obsessions with diet culture, but also life-threatening eating disorders.

While we’re on the subject, what mother’s goal is to have her daughter look “yummy?” Let’s just leave that there for a minute.

Reebok is a company with which you might be more familiar. They’ve done better more recently, but at one point, they decide to announce to the world:

“Cheat on your girlfriend, not on your workout.”

Christmas sales that year were likely down from girlfriends not buying Reebok for their boyfriends that year! Isolating a certain demographic for the sake of a joke rarely leads to success. The more people you can include in your advertising, the more possible sales you can grab.

Dr. Pepper had a hit on their hands in the 1980s when they got the world to sing, “I’m a Pepper, you’re a Pepper, he’s a Pepper, she’s a Pepper. Wouldn’t you love to be a Pepper too?” Remember what we said about being all-inclusive? That’s a great example. Unfortunately, about thirty years or so later, they decided to go the other direction with this slogan:

Once again, we see a case of a company trying to appeal to one section of the market and failing. After getting plenty of complaints about this particular ad campaign, Dr. Pepper quickly pulled the ad.

It should go without saying that a successful ad should not endorse any sort of crime. It can’t be completely determined what this is an ad for, other than date rape.

“Spike your best friend’s eggnog when they’re not looking.”

The ad was actually released in Bloomingdale’s 2015 holiday catalog to promote Rebecca Minkoff merchandise. The public was rightfully outraged and dragged Bloomingdale’s over it. The company issued an apology, but they made no statement on how the ad ever got through the approval process in the first place. 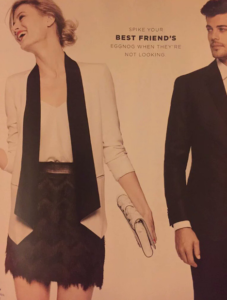 What have we learned today? Advertising slogans can indeed make or break your company. Be inclusive. Be kind. Even if you think your target audience would appreciate a certain joke or pun, think about whether it could alienate or insult other groups of people. And for crying out loud, please don’t promote destructive or harmful behaviors! A slogan can be shocking, evocative, even provocative, without being offensive. And just to be safe, have a back-up slogan ready in case you come up with anything like the ones above.

About the Author: Tracy Slonaker

What else is there for a runner to do during a workout than to dream of new novel plots? That’s what started this Philadelphia area native (Go Eagles!) started on a life of writing. When this elementary school teacher is not watching sports or playing games herself, she loves to do (or correct) any other writing she can. Tracy came to Little Red Writing when invited by Jen, who edited her first novel, to try something new. Writing content has opened many new doors and stretched her thinking skills–something her students and family have enjoyed toying with.