Personal Profiles: No Place Like Home with Allie Gann

At Little Red Writing we’re prolific writers and aggressive marketers. It’s almost like we’re machines, but really we’re not. We’re people with our own personalities outside of the personality of our brand. So for some Friday fun, we want to pull back the curtain and show you the people that make Little Red Writing run. To do so, we’ll be running a series of profiles that ask a variety of questions from food to travel and even the important things like, “if you were an animal, what would you be?” We hope you enjoy getting to know our staff a little bit better! 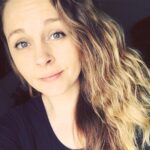 Our first series of questions, titled “No Place Like Home,” relate to things about your home/hometown and what makes your area home. This week’s profile is on Allie Gann. Allie functions as our Business Developer, but she’s also a mom to two awesome kids Isaac and Brenya. Allie started out at a content mill then moved on to working as a freelance content manager for a marketing agency in Nashville. Allie is now a resident of Harriman, where she loves the small-town atmosphere.

What is your favorite place in your city and why?

Honestly, there really is no place like home. Mostly because Harriman isn’t exactly brimming with activities and events to entice me out of my comfort zone. But also because I’m less than a year into living on my own for the first time. I do have a 6-year-old roommate, but she’s my daughter so it works.

Home is finally my happy place, so of course, it’s my favorite place to be now.

Do you have any pets and if so tell us about them and their personality/quirks?

Brenya and I have the blessing of being graced by the love of 4 cats.

Pinky, the only girl of the bunch, is recognizable by her mustache and often brings gifts of various dead animals to show her love.

Next are my boys, Biscuits and Bacon. Fraternal twin brothers with Siamese markings, Biscuits has long hair and Bacon is a shorthair. I had Biscuits for a few months before I went back for his brother, Bacon. At the time he was known as Feral because he hadn’t been socialized to humans. The first two months after he came home were spent behind the dishwasher. He now knows he is in a safe place and is aggressively affectionate at times.

To make his transition go as smoothly as possible, I also brought along their father, Floki. Also with Siamese markings, he is the 2nd in command behind Pinky and together we all make one big happy family.

What is your best lazy day?

The best feeling in the world is waking up without an alarm on a slightly overcast day with no plans on the schedule. Brenya will come in to snuggle up with me once she wakes up and I’ll sip my coffee while she stays still for about 5 minutes… Then she’s off at full blast and I’m just along for the ride.